If bad news has become the norm of 2020, the universe allowed an exemption for the young actor Sara Gutierrez, who in the midst of quarantine got the most significant call of her career. “Do you want to be the lead in the first outdoor show in New York City since the pandemic started?” asked director Ellpetha Tsivicos, and playwright Camilo Quiroz-Vazquez, the creative forces behind Quince, an immersive theatrical experience that subverts a traditional quinceañera by centering a queer heroine, Cynthia, a Mexican American girl divided between her culture and her future.

Gutierrez couldn’t hold her tears as she told Tsivicos and Quiroz-Vazquez how much she needed these news at that precise moment. The previous three months had been a nightmare, as NYC became the epicenter of a global pandemic that forced businesses and artistic institutions to close their doors, leaving New Yorkers perhaps for the first time without the possibility of overcoming grief by having their souls restored by art.

“We had a Cinderella moment,” says the director, her voice overcome with happiness as she describes Gutierrez’s habit of sending her pictures in which she’s memorizing her lines. The excitement of the ensemble fills the creators of the show with purpose, “they’re theatre warriors,” says Tsivicos.

Quince was supposed to be a staged reading back in April. “We probably would have done it in a room in the Williamsburg Public Library,” says Quiroz-Vazquez. But as the pandemic became more unmanageable and total re-opening continued being elusive, the duo settled on two dates in August. Having done outside shows with Double Edge Theater, they were comfortable with the updated setting.

For years, they had wanted to stage a show at The People’s Garden. Located in the heart of Bushwick, the community-built, and volunteer-maintained space, provides a gathering space for the neighborhood that Tsivicos and Quiroz-Vazquez call home. “We know the owners of all the shops in our neighborhood, we’ve always tried to be local and create communities wherever we go,” says Tsivicos. The garden’s unassuming beauty was the perfect setting for Cynthia’s rite of passage, an oasis hidden in a bustling Brooklyn neighborhood.

For Tsivicos and Quiroz-Vazquez, doing the show was no longer just a matter of bringing their work to a stage, it became a way to thank a neighborhood that in years past gave them a home to return to after their daily dealing with the deep inequality New York artists face. The playwright explains everyone doing the show is working one or more jobs, which made scheduling difficult, but it also revealed the misconception that artists belong to the elite, “what could we all accomplish if we could focus on our art more specifically?” says Quiroz-Vazquez.

It’s a strange, but poignant coincidence that on the weekend Quince premieres, First Lady Melania Trump is reopening the Rose Garden at the White House, which she remodeled in the midst of the pandemic. As audience members in Bushwick attend a show created out of love, even tickets were distributed for free, in Washington D.C. a lavish garden will be revealed, meanwhile outside the White House has been barricaded to prevent peaceful protesters from disturbing the President’s day. Which one seems more like the people’s garden?

While most of New York live theatre remains dormant, and few commercial endeavors have risen to the challenge of what the time demands of them, the  artists involved in Quince have been able to create a symbiosis of joyful creation and demands for social change. Friends of Tsivicos and Quiroz-Vazquez are contributing artwork to create the setting of the play. One of their friends, whose work is often political, is designing a crochet sculpture to be used as centerpiece, meanwhile every actor cast is from the Mexican or Chicano communities.

Art in New York City has become a luxury only reserved for those who can pay the highest prices, quite the contrast considering many of the performance arts started as folklore and community rituals. From the moment they met and decided to start working together, Tsivicos and Quiroz-Vazquez, have centered their work on the mission of rescuing and preserving cultural practices that are disappearing with the steamroll of globalization.

For Quiroz-Vazquez, the Mexico of his grandparents is something out of memories he will never get to experience. When he visited Cyprus, where Tsivicos’ family came from, he was surprised to realize how many traditions were preserved and practiced, to the point where the Cyprus he saw in the 21st century, has more in common with the Mexico of his ancestors.

Tsivicos had the opportunity to spend lots of time with her grandfather before he passed away, and captured moments of his daily life, so that even after his death, they can stay with her, they’re also memory tools so that she won’t forget where she came from. A land of farmers where her grandmother would still make her own bread and cheese. Tsivicos points out how in quarantine, many Americans who had never considered not buying their food in supermarkets, were suddenly baking bread, making cheese, desperately trying to secure themselves to any roots, as the world shape shifted overnight.

As New Yorkers, Tsivicos and Quiroz-Vazquez are performing a small miracle to remind the city of what it can be when it centers the interests of a community, over greed and indifference. “we need social activities, especially during everything that we’ve been through, it’s important to remind people there are more social activities than just eating out,” says Tsivicos. Quince of course will follow strict social distancing rules and masks will be enforced for the safety of the performers and audience members. It is totally safe, according to the director, who also expresses “a lot of our work goes back to catharsis either for us or for groups of people.”

As audience members leave Quince, they will have experienced a modern version of learning, embracing and loving culture through oral tradition. To eavesdrop on each of their conversations on their way home, as they take in the warmth of the Brooklyn summer night, the fragrance of the plants and flowers, and the power of the story they just saw unfold before their eyes, an honor and a pleasure almost too overwhelmingly beautiful to dream of. 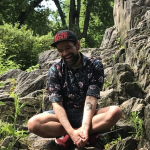