If you could describe Leila Buck’s play American Dreams in five words, it would be this: “C-SPAN as a game show!” said the show’s director Tamilla Woodard in a recent Zoom call.

This summation makes Buck laugh. “I grew up with Voice of America, which was mostly radio,” she explained. “It was what a lot of people all over the world heard. Some of it was great programming, and some of it was borderline propaganda. It was propagating an idea of what this country was. That for me was an inspiration [for American Dreams].”

American Dreams is positioned as a game show created by the U.S. government. In it, three contestants compete for U.S. citizenship by answering questions about the government, and laying bare every single detail about their lives. The audience are active participants in the game show, helping interrogate each contestant and voting for which one they think most deserves that golden ticket.

In a time when political coverage and discourse has become a bloodsport, American Dreams forces audiences to think of the role they play in our democracy. And that even if certain issues, such as immigration, may not affect them personally, they still need to take an active role in being informed citizens.

“So many of us are immigrants,” said Buck. “We are children and descendants of immigrants, whether they were brought here by force or whether they came here willingly. The only people who get to not claim that identity are Native and Indigenous people.”

American Dreams was first performed live onstage in 2018 at Cleveland Public Theatre, after being developed by the Working Theatre in New York City, run by Woodard. It has now been retooled to be a live Zoom game show, and has been “touring” around the country since September. It started at Arizona State University, then has been hosted by a bevy of other venues—who all chipped in to produce the play. Its next date of performances is Nov. 10-15 at Marin Theatre Company in California (which really just means that the performance times will favor West Coast audiences).

One of the inspirations for the play was the legacy of immigration in Buck’s own family: her grandparents were refugees from Lebanon whose immigration journey wildly differed from Buck’s mother, who was able to get her green card through marrying Buck’s father.

“My grandfather believed in our democracy, and then he came here and received the treatment of a man with an accent from an Arab country who was Muslim,” said Buck. “And it really broke his heart to not see what he believed about this country reflected back to him.”

Buck’s father was a foreign service officer who met Buck’s mother when he was stationed in Lebanon. Buck spent a large portion of her childhood abroad.

American Dreams was developed over two years with Woodard, and a number of actors such as Jens Rasmussen, Imran Sheikh, and Osh Ghanimah—whose own immigration stories were incorporated into the final piece. It had its world premiere in 2018. Buck also performs in the show.

Then in early 2020, as theaters were shutting down, Woodard reached out to Buck about adapting American Dreams for Zoom. “There was a lot of work that was sort of like: stage shows that were being put up, ‘tune into the rehearsal that we taped,’ ‘watch this instead for theater,’” said Woodard. “I was just like, ahhh! This is so desperate.”

But the two of them realized that American Dreams, which depended on audience interaction, could replicate the feeling of watching a live show. For one, select audience members at every performance are invited to interact with the performers. Then the actors also ask the audience questions, and at certain moments, can see the audience. And, of course, everyone votes for who they want to become a citizen. It’s not the fact that the audience has to show up, which is the case for every Zoom theater experience, it’s that their presence is essential to the show itself, and that they need to be fully present for it. There’s no turning off your camera and switching over to another screen at American Dreams.

Also, the show has three different endings, depending on what the audience decides, so it encourages repeat viewings.

“What I miss is those things we used to do in person that forced us to be just where we are, to actually be fully just where we are,” said Buck. “Instead of all the things that we’re juggling because these screens and devices are our only mode of communication now. So that invitation to actually just be in the space fully for that 85 minutes, is something that people [audiences] have remarked on really needing.”

The Working Theater had made partnering with different organizations, and touring its shows across NYC, as part of its mission. But American Dreams is a bigger scale than its previous efforts—the play has been presented at six, going on seven, venues around the country. In total, 12 different theaters and organizations helped fund the tour.

According to Woodard, it started out as calls to her friends who ran theaters, and grew from there. “I know some people for whom this is exactly the kind of thing they want to do—those are the people I started with,” she said.

With most theaters pivoting to creating online programming, as they see their bottom line dropping out, this kind of collaboration (and profit sharing) that American Dreams has pioneered shows that the only way the theater industry will survive is if everyone works together.

“How do we take away the impulse to create systems of competition, so that we can actually, you know, live inside of environments of community building?” said Woodard. “This was one of those ways that we could do it, by saying, ‘Hey, you don’t have enough of any of this stuff? How about we all come together?’ And we just split the pie up? The more people here, the more beneficial it is, rather than the more people here, the less I get.”

Woodard said they’re working on adding one more week of performance, so that the actors in the show can qualify for health insurance under Actors’ Equity.

Over the past 5 years, as America has gone from the Obama Administration to the Trump Administration to now the Biden Administration, the immigration conversation (while it has become more xenophobic and destructive) has also remained something that not many Americans are aware of on a policy level. And it continues to be a conversation reduced to simple talking points, such as “build a wall” or “open all borders.”

But to Buck, the truth lies somewhere in the middle, and she hopes the play gives people a more educated view of what it actually looks like to meet an immigrant and decide if they should be allowed to enter America. And if those parameters are flawed, how can they be changed.

“I have met people whose job it is to sit across from another human being and decide in three to five minutes, with a stack of papers, whether they believe this person to be a threat to others, and whether they might cause harm,” explained Buck. “And people have actually let people in and then been told that they actually did commit a crime. As open as they wanted to be, that impacted their decision-making process. And so what I wanted to do was to try to put the audience in a position where they couldn’t just say: ‘The system is bad. Or the system is good. Or we should let everyone in. Or we should build a wall.’ But actually reflect on: How am I participating? By paying my taxes, by who I vote for, what do I want this system to mean?”

Of course, there are some audience members who choose not to vote in the game show, such as in the performance I was at, because they didn’t think they should make a decision about someone else’s life. But to Woodard, inaction is also an action (just like when you vote in a real election). The play goes on regardless if you participate or not. And as the 2020 Election has shown all of us, democracy is fragile and can be broken if you don’t actively participate and fight for it.

But American Dreams is not all doom and gloom. The show is funny, moving, tragic at times, and never loses sight of the humanity of everyone participating—actors and audiences alike. One of Buck and Woodard’s favorite parts of the show is when they ask this question to the audience: “What do you believe someone should have to PROMISE in order to be a citizen of this country?”

The answers range from: “be loyal to the USA” to “don’t be a dick” to “bring their full selves and culture into this country” to “do your best every day to make the country a better place, however you define that.”

“It’s just a reminder of that dream that we hold in each of us,” said Buck. 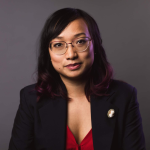